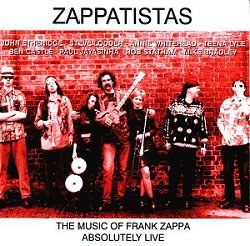 3 ) Sexual Harassment In The Workplace

YES, I am one of those nerds old enough to own a copy of every vinyl LP the late Frank Zappa made in his eady years. I'm willing to bore to death anyone who shows the slightest interest in this fact.  But I am not alone and many of us went to the sell-out concert by the Zappatistas on Sunday afternoon.

Most were probably suspicious of what threatened to be a po-faced tribute band which couldn't possibly live up to the inimitable spirit of our Frank. But gratifyingly, from the moment the crisp, propulsive strains of Peaches en Regalia thundered the concert into life, this Zappatistas' concert was an uplifting joy to hear and see.
The eight highly skilled instrumentalists in the adhoc group so evidently enjoyed themselves playing a sequence of fine Zappa arrangements.

Without exception the group members proved to be superb soloists. So it is unfair to single out Annie Whitebead for her terrific solos, except that female trombonists are so rare.

And I have to heap plaudits upon guitarist John Etheridge's magnificent underpinning of the whole concert and his soaring solo ~ which just blew me away. They all deserved to be paid as much as footballers.

British guitarist John Etheridge seems to spend most of his life paying homage to deceased musicians. With his jazz combo Sweet Chorus he performs the music of his old mentor Stephane Grappelli, and when he wants to let his hair down he plugs in and lets rip with the astonishingly loud Frank Zappa tribute band the Zappatistas.

In Leeds, the eight-piece group took to a stage cluttered with manuscript-laden music stands - an apt symbol of the Herculean musical feat ahead. From the start Etheridge placed himself firmly in the spotlight with lightning-fast guitar runs. The playful lyricism of his Grappelli side - man persona was nowhere to be seen: instead the towering fusion virtuoso emerged in a blaze of arpeggios and insane chord progressions. Unlike many avant-garde rock musicians, Zappa enthusiastically embraced technical accomplishment, so Etheridge's occasionally grotesque overplaying never seemed anachronistic.

Far from cowering in his shadow, the rest of the band maintained an almost manic level of intensity. Annie Whitehead wrestled and writhed with her trombone. The front-line horns beat a strident path through the tumbling counter-rhythms laid down by drummer Mike Bradley, and xylophonist Teena Lyle accompanied herself with some banshee-like shrieks.

As a composer Zappa was equally at home writing stately classical melodies as he was churning out inspired heavy-metal riffs. Playing tribute to his audacious eclecticism is not for the faint-hearted, yet the Zappatistas took it all in their stride. Frisky reggae segued into greasy funk, 1 2-bar blues were invested with the fury of exploding galaxies, and there were long stretches of acid-drenched free jazz. Through it all the musicians grinned and bopped around the stage as if they were playing simple party tunes, and Etheridge jacked his grin several notches higher each time one of his band mates attempted anything preposterous. For those unfamiliar with the great man's work, it is hard to imagine a more exciting introduction than this.

Up until now most Zappa-meets-jazz revivals have foundered either because the tunes have intricate structures that mitigate against free-blowing improvisation, or because the musicians lack the the in-your-face musical anarchy and tongue-in-cheek humour of Zappa himself.

Faced with the good intentions of most re-creations, there has always been more genuine jazz feeling to be found by going back to Zappa's own disc's like Waka Jawaka. From the first bars of the inevitable, Peaches en Regalia, it was obvious that former Soft Machine guitarist John Etheridge had cracked the problem. With jaunty arrangemants by keyboard-player Steve Lodder, and an all star octet, there was a workable balance between the natty thematic twists of Zappa's melodies and space for the band's soloists to improvise successfully.

This was by no means restricted to Etheridge's own wailing guitar, and on Grand Wazoo trombonist Annie Whitehead slowed down the pace for a raunchy solo before Paul Jayasinha emerged from his curtain of hair to speed things up again with an inventive chorus built on extended trills. Lodder's own keyboard solo was the highlight, working the tone wheel to bend the pitch behind his chunky phrasing.
As the band reached the vocal numbers it was obvious that several of the audience had dusted off their copies of Cruisin' With Ruben and the Jets or Hot Rats as they silently mouthed along with the band.

Anyone who relished Ruth Underwood's percussion contributions to Zappa's original band would have been delighted by Teena Lyle's interludes on vibes and a range of unorthodox idiophones, and drummer Mike Bradley propelled the group along with a perfect feel for 1970's jazz rock. Full marks to the Nottingham Arts commission that set-up the project and its subequent tour, and to Etheridge, Lodder and the band for realising it in so thoroughly enjoyable and unstuffy a fashion.

The 'ZAPPATISTAS' started as a commission from Nottinghamshire County Council when John was approached by Dave Groome to put together a band for a one off performance at the Newark festival in October 1998. John then contacted Steve Lodder and together they chose the material to perform a selection of Frank Zappa's music with the thrilling line up of ANNIE WHITEHEAD - trombone / TEENA LYLE - percussion / SIMON BATES - tenor saxophone / PAUL JAYASINHA - trumpet / ROB STATHAM - bass / MIKE BRADLEY - drums

The enthusiasm and success of the performance convinced them all to take the show to further audiences and with Geoff Amos offering his services as agent, the members were all ready to reform the Zappatistas again for a November / December tour in 1999. Zappatistas agent : Geoff Amos, Triangle Creative Productions, Croft House, Sowerby Bridge, West Yorkshire HX6 3AS England